Perhaps the best example today may be Hong Kong, where largely middle-class students and office workers are challenging the world’s most powerful autocracy, one that, by the way sees itself as the tribune of the “workers and peasants.” Although the protests are seen largely as based on issues of personal freedom and democracy, it also reflects a wider, deeper and more pervasive malaise in a city with a per capita income of $ 60,000, almost four times the national average and three time that of Beijing or Shanghai.

Whether in Europe, East Asia or the Americas, this new middle-class rebellion may be seen as what one Marxist publication called “a strike against the rising cost of living.”

Although the leftists identify this more with protests against things like subway fare hikes, in the latest uprising the key has been those things, notably energy and hous- 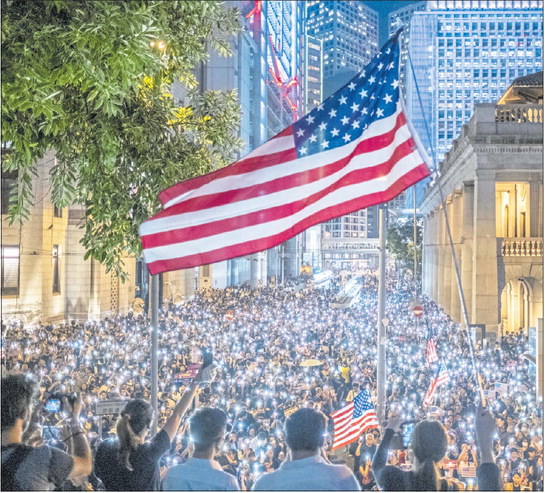 A rally calling for the U.S. Congress to pass the Hong Kong Human Rights and Democracy Act in the Central district of Hong Kong, Oct. 14, 2019. 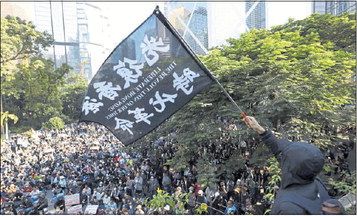 A protester waves a flag reading “Liberate Hong Kong, the Revolution of Our Times” during a rally for students and elderly pro-democracy demonstrators in Hong Kong, Saturday, Nov. 30, 2019.

ing prices, which threaten to “proletarianize” the living standards of the not long ago decently comfortable.

The global decline of the middle class

In virtually every high-income country, and increasingly some developing ones as well, the middle class, as a recent OECD report states, is looking “increasingly like a boat in rocky waters.” Overall, particularly in the West and nations like Japan, this decline has been accelerating for three decades. In the United States, among children born in 1940, about 90 percent grew up to experience higher incomes than their parents, according to researchers at the Equality of Opportunity Project; that dropped to only 50 percent among those born in the 1980s.

There’s a clear a loss of confidence in the future among the middle orders, and most particularly their heirs. Three-quarters of American adults today predict their children will not grow up to be better off than they are, suggests Pew. These sentiments about the new generation are even worse in France, Britain, Spain, Italy and Germany. In Japan, a remarkable three-quarters of those polled believed things would be worse for the next generation.

Hong Kong: the epicenter of a global housing crisis

At the center of middle-class rebellion lies the rapid rise in the cost of housing, which makes up, notes demographer Wendell Cox, for at least 85 percent of difference in the cost of living. If you think Southern California or Manhattan are expensive, try Hong Kong. The 2019 Demographia International Housing Affordability Survey found Hong Kong median house prices at 20.9 times median household incomes, the least affordable market in a nine nation survey. Hong Kong’s home prices are well above severely unaffordable Vancouver ( 12.6 times MHI), Sydney ( 11.7 times MHI) and San Jose ( 9.4 times MHI) or Los Angeles ( 9.2 times MHI). This does not even count the generally small size of Hong Kong apartments.

To some urbanists, Hong Kong should be a kind of paradise, with at least twice the population density of any other urban area in the more developed world, at 67,000 per square mile or 25,900 per square kilometer. Its skyline is rated the world’s best.

Yet beyond the façade, the average Hong Konger, particularly the younger generation, faces a daunting challenge to maintain, much less improve, their living conditions. In a city where the average dwelling is less than 500 square feet, developers are pushing micro-flats that are sometimes the size of parking spaces.

These housing conditions contribute to what the South China Morning Post labeled “a tsunami of discontent” from what had long been a fairly quiescent population. When ruled from London, and then even from Beijing, Hong Kongers seemed largely content to focus on traditional concerns like family, food and, of course, making money. But as more people have immigrated from the mainland, prices have tripled in the past decade, with some living in spaces not much bigger than coffins while 210,000 live in tiny illegally subdivided apartments that are often less than a room One critic, Alice Poon, in “Land and The Ruling Class in Hong Kong,” accurately labels this a “ feudalistic system,” controlled for the benefit of landed tycoons and government bureaucrats. Kenneth Tong, a 34-year-old academic researcher living with his parents, compares his generation’s predicament to playing a game of Monopoly that has been going on for 50 years, and all the property is taken. “If you continue to play this game,” he suggests, “the disparity between rich and poor will be wide ... and more and more people will live in abysmal conditions.”

Green policies and the middle-class rebellion in the West

A similar, if not as dramatic, crowding can be found in other societies, particularly around urban centers, such as in Sydney, Vancouver, London, New York, San Francisco and Los Angeles. In all these places global capital — much of it from China itself — has boosted prices beyond what most middle-income families can afford. In each homeownership is now increasingly out of reach, particularly for the young. Although some of this reflects market forces and capital flows, much of the price rise, particularly in California, parts of the Northeast, Britain and Canada reflect urban containment regulatory policies that restrict housing supply, particularly on the periphery, where land costs tend to be cheaper.

Recently these policies have been propelled by largely flawed notions that increasingly high density would make housing cheaper and produce lower GHG emissions. Actually, the densest places with the strongest regulation are almost always those with the highest levels of unaffordability. Yet it is in the energy arena where “green policies” have solicited the greatest push-back in a large number of countries.

Some, like British Marxist historian James Heartfield, see the emergence of “green capitalism” as a new ruse for the upper classes to suppress the lower by creating artificial scarcity in everything from energy to housing and food. The high energy costs derive from zealous climate change politics claiming that any energy source outside solar and wind are inherently dangerous to the health of the planet. This has included both the largest contributor to emissions reductions — replacing coal with natural gas — and emissions-free nuclear power. This dogmatism underlies efforts by government planners to raise the price of fuel in order to reduce consumption and force people onto transit.

A rebellion sure to grow

Such policies have proven exceedingly unpopular among much of the middle orders, who have launched a devastating and occasionally violent gilets jaune rebellion. President Emmanuel Macron’s energy price rise may be popular in the salons of the Paris elite, but not so much among the vast majority, notably the 90 percent of regional residents who work outside the central district, as well as large swaths of smaller cities and towns of La France Périphérique.

Other rebellions against the urban climate agenda have spread to normally more placid places like Norway and the Netherlands. Steady energy price rises from green policies, as well as boosts in subway fares, have resulted in major protests around Chile’s capital Santiago, with 20 deaths and 1,200 injured.

Of course, no rational person would like to see similar violence spread or would oppose sensible environmental policy that does not target the middle orders. But it will continue worsen as long as policy makers, and the private sector, ignore the basic needs and aspirations of the majority population. If not, this rebellion will spread beyond places like Paris, Santiago and Hong Kong, with political consequences that will be difficult to predict but could be profound.

Joel Kotkin is the R.C. Hobbs Presidential Fellow in Urban Futures at Chapman University in Orange and executive director of the Houston-based Center for Opportunity Urbanism (www. 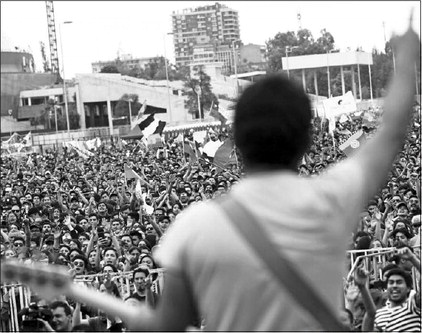 A musician gestures to the public in O’Higgins Park during an anti-government music concert in Santiago, Chile, Sunday, Oct. 27, 2019.

Click here to see this page in the eEdition: